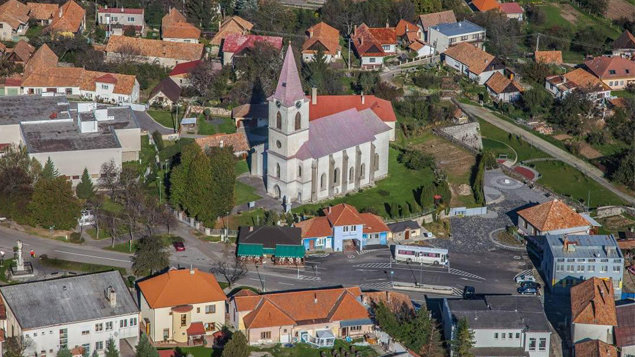 It is situated in the Štiavnice mountain. In past it was one of 9 royal mining towns, where silver and other precious metals were exploited. Collecting localities of amethyst  can also be found in Pukanec. 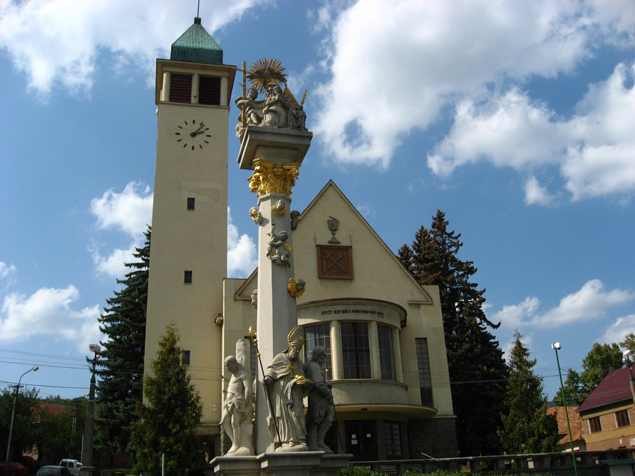 If you visit Pukanec, a  former independent royal mining and craft town, you can visit a Roman – Catholic church of St. Nicolas, an Evangelic church, a Potter´s house, the Potter´s museum of Mr. Frank or the Museum of artisan´s trade. Preserved town walls and a sculptural group of the Holy Trinity can also absorb your attention. The village organises annual Pukanec craft fairs that are always held at the first weekend of July. Visitors have an opportunity to admire demonstrations of craftsmen, try local specialities and relax watching various cultural programmes. 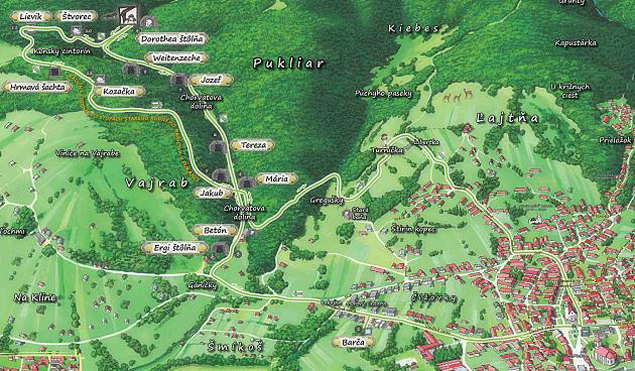 Nature trail In the track of an old ore mining in Pukanec ( a former independent royal mining town was founded in the second stage of mining development in Slovakia at the end of the 13th century) begins on the square of Pukanec outsite the Evangelic church, which was erected by the state road running from Levice to Banská Štiavnica. On the square there is also a bus stop, where a blue signboard of Pukanec - Rudno nad Hronom  tourist trail also finishes.

Leaving point:  Information board outsite the Evangelic church on the square in Pukanec.

Target point :  Terra Banensium building – Land of miners on the square in Pukanec

Description of the trail:

Nature trail informs visitors about the history of the former independent royal and mining town Pukanec, focusing on old mining structures and description of mining, processing and gold – silver ore treatment. On the information boards  there is also partially depicted flora and fauna of Pukanec surroundings. They inform visitors about the most typical geological features of direct surroundings of Pukanec. Length of the trail is 5,2 km in modest terrain with 140 m superelevation.

Demandingness of the trail: specified as  modest 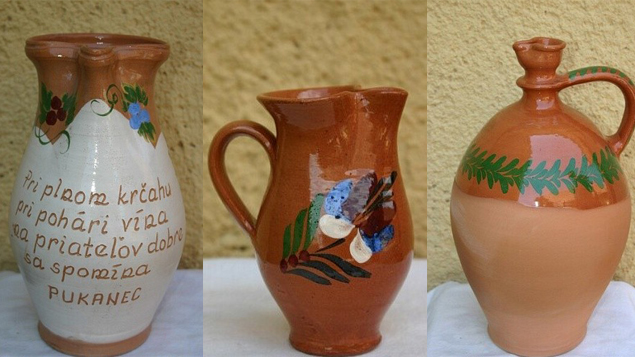 Pukanec, where lodes had been exhausted earlier than in other minig towns, was gradually transformed into a craft town. It was supplying its products not only to mining towns, but also to markets and fairs in wide surroundings. Pottery artisan´s trade had been organized in Pukanec for over 200 years in a guild, of whom the first written record comes from the year 1663. In the period of guilds pottery products of Pukanec potters reached an excellent quality in terms of technological point and they had both dimensionally and functionally wide selection of products. They also became popular due to their high aesthetic level, which excelled products from neighbouring pottery centres. In the half of the 19th century 49 pottery craftsmen were working in Pukanec. Their products were sold at markets and fairs in Levice, Zlaté  Moravce, Nitra, Banská Štiavnica, Krupina, Nové Zámkz, Ostrihom,  Vacov and direction towards south in the direction of  Hungarian Lower land. The products were widely used in both town and agricultural households.

This years Pukanec is going to organise Festival of folk crafts, folklore and traditional gastronomy XXIV Pukanec craftsman´s fair on 1 – 3 July 2016. „ Through present fairs the village wants to revive a tradition of Pukanec fairs and establish a tradition of Pukanec craftsman markets, which would be held annually the first Saturday and Sunday of July and present especially the work of craftsmen, designers, applied art designers, creators of products from wood, clay, metal, leather, stone, glass and other materials. 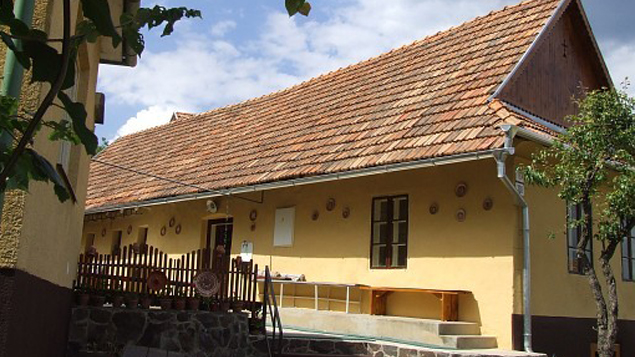 Visit also the Museum of pottery (Visit is possible by mutual consent ):

In the exposition the oldest history of Pukanec, development of mining, crafts and interior of the burgher´s room´s  kitchen are also included. At the present time an exposition of „ WW2 in documents of Pukanec dwellers“ and an exhibition of Ján Moravčík ´s ceramics have been installed.

It has hundred years old tradition in Pukanec. It indicates the name of a vineyard hill Vajrab (512m).

It is a mispronounciation of a German name Weinrebe (wine grape). German miners - migrants called Weinrebner lode, situated on the hill ( the highest placed vineyards in Slovakia, 495m). Wine grape is grown in the area of Ľajtňa and Nad mestom (Over the town). In the past hybrid cultivars( called samorodák) had prevailed. They were grown by cut on head of the sort black and white otelo – Concord grape (Noah), Izabela, Storadovec (Sásoroš), Muškát Ferdinand Lesseps (Vrábelčina), Baco and others. Later home-grown grafts, such as Chrupka, Rizling, Malingre, Medovec, Magdalénka early (Madlen), Silván, Portugalské modré (Oporto) and others were planted in the vineyards. Nowadays new vineyards are  established on high lines. High quality white vines are made from grapesPesecká Leánka (Feteasca regala), Muller Thurgau, Welsh Rizling , Pinot blanc, Green Veltliner, red wines from Frankovka a Svätovavrinec. 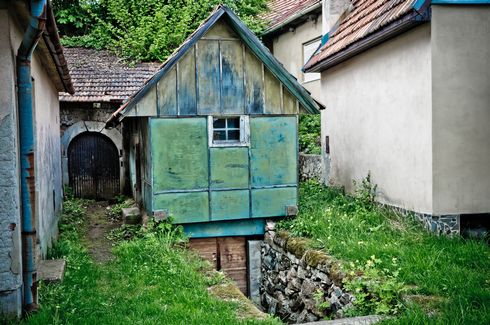 Freshness of wines and keeping their quality  are ensured by  good wine cellars – called  ľochy, which had been dug into weather – stained andesite (gribina) by miners in previous centuries. The most wine cellars are located at Urbanko (Pri Urbankovi). Some of them are dug up above each other even in 2 storeys, they have different dimensions and depths. The largest ones are 20 m long and 3 m wide,eventually have lateral galleries. Pukanec owners of the vine cellars (ľochári) are very hospitable and they like to praise themselves for cold drink, a bit rough but with distinct  aroma and taste.

The biggest vine cellar in Pukanec since 1900

The vine cellar has its old history. The owner is happy to open it for you and introduce his wines, which are very specific, mainly by location of grape´s maturing, which his wines are made from.

We provide a pleasant place for small or bigger groups of visitors, who do not hesitate to discover, experience and enjoy lovely wine or local specialities from Pukanec. Conducted wine – tasting as well as visit of the vine cellar is possible to be ordered at least 2 days beforehand.

In case of interest in  Tekov wine route contact  - http://regionvino.sk/ 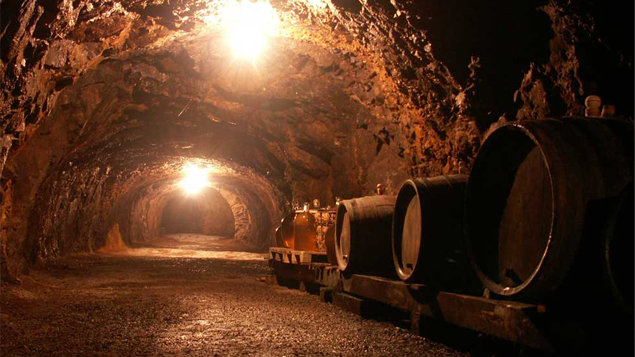