Krížny vrch belongs to Tekov region and in terms of viticulture it belongs to Nitra viticulture region. Its charm is formed by 70 hectars of vineyards and approximately 250 “hajloks“ (small cottages with wine cellars). There are fields, Levice Calvary, a Jewish cemetery, an electricity distribution plant in the surroundings of the hill and it is closely connected with Kusá hora natural reserve, which provides a lot of wild animals with haven. Apart from that, many rare plants can be found here as well. We are inviting you to get to know „ Krížny vrch treasures“ which are hidden among the vineyards. Interesting information on those treasures as well as other piece of knowledge can be found on 4 signboards. Levice town in cooperation with the Krížny vrch Levice Association of winemakers established an interesting route in the vineyard area Levice – Krížny vrch, that runs among „hajloks“ (small cottages with wine cellars). Benches and signboards have been made by skilful students from SOŠ secondary school in sv. Michal street in Levice. 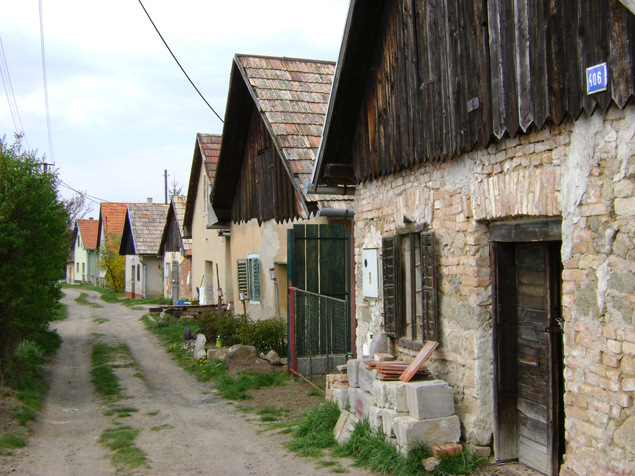 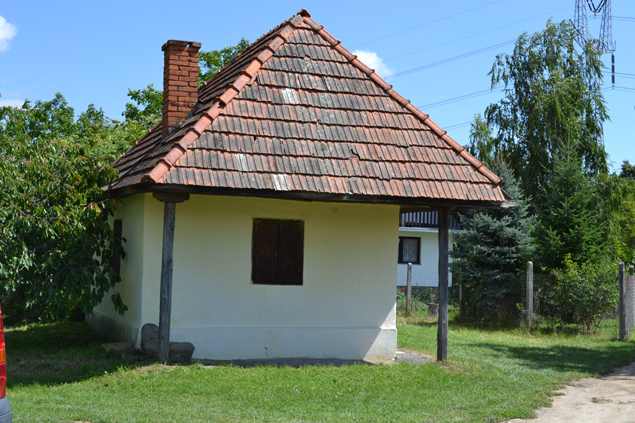 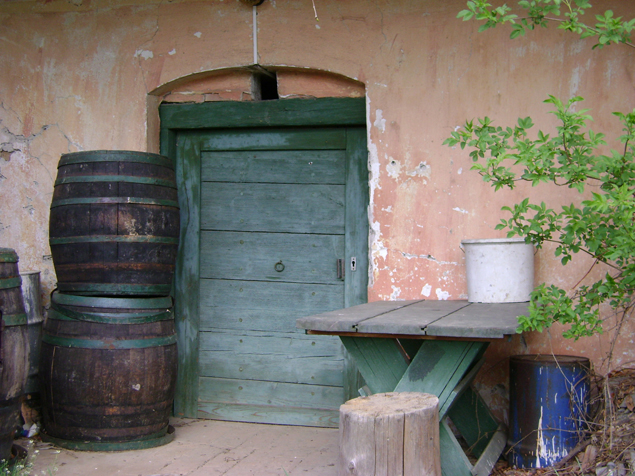 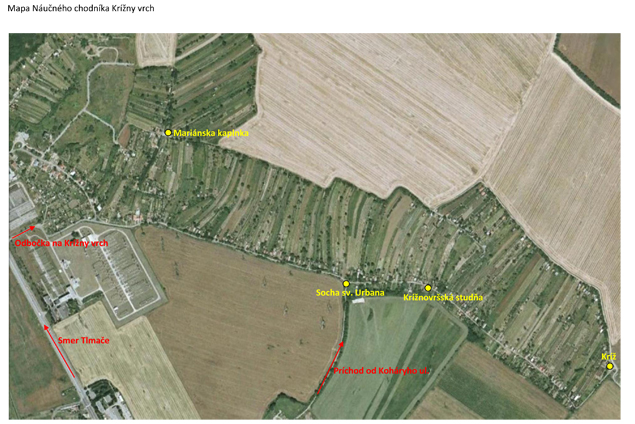 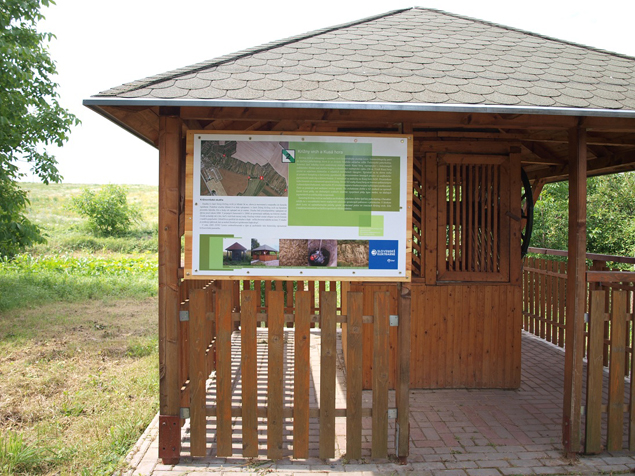 Unique Horšianska valley is located about 6 km from Levice in Horša town section. It is a natural reserve of  313,38 hectars area which Sikenica stream flows through. It lies in the territory of Levice /Horša/, Krškany, Žemberovce, Bátovce and Drženice. It has a character of a small village with preserved popular architecture. Exceptionality in terms of geomorfology, botany and hydrology ranks the valley among the most significant areas in the territory of Nitra self – governing county. Horšianska dolina has been identified as  National nature reserve. This modest trail can be used  by visitors for walks all year round since 1976. It is approximately 2,5 km long (35 minutes).

Horšianska valley, incised into Ipeľ highlands, is the nature reserve with flora of forest – steppe character with abundant representation of insect, rare species of birds and reptiles, especially lizards. The area has an air of remarkably interesting geological structure and location and it makes deep aesthetic sensation. The entire valley  up to 300 m wide, bordered by steep slopes, is meandered by Sikenica stream with preserved bramble – bush. The valley has a typical canyon character with 60 m altitudinal segmentation between the river – flood plain and surrounding the surface of Ipeľ heights. Distinctive up to 30 m tall rock faces form rock towers and edges highliting miniatures of its relief. Vulcanites are presented by andesites and  andesite tuffs. Majority of the valley is covered by forest. Cornelian cherry, oak tree/ Quercus pubescens/, Tartarian maple, Chequer tree, Spindle tree, Euonymus verrucosa form  a remarkable part of it. The rarest remains are an intercommunity of oak – hornbeam forest with Quercus pubescens. Horšianska valley represents the largest natural reserve in Levice district, significant in terms of geomorphology and botany. 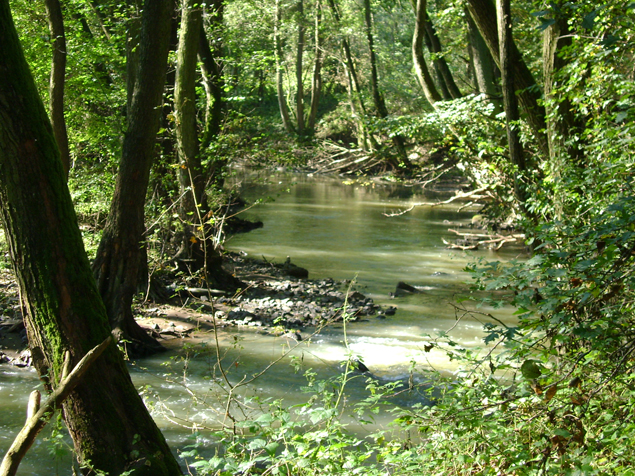 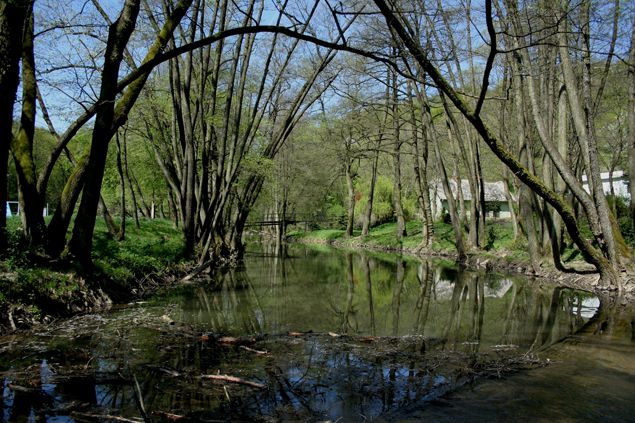 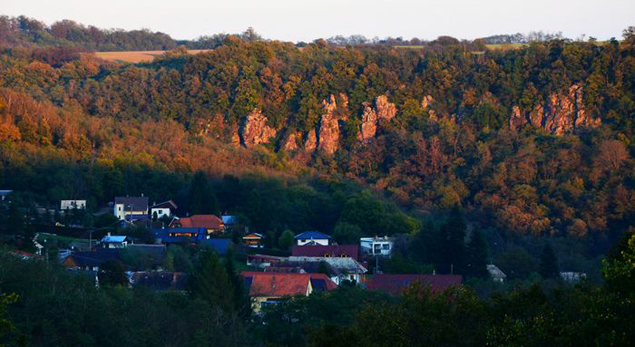 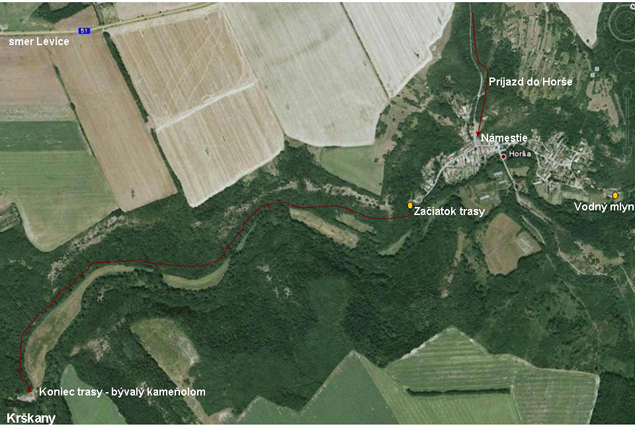 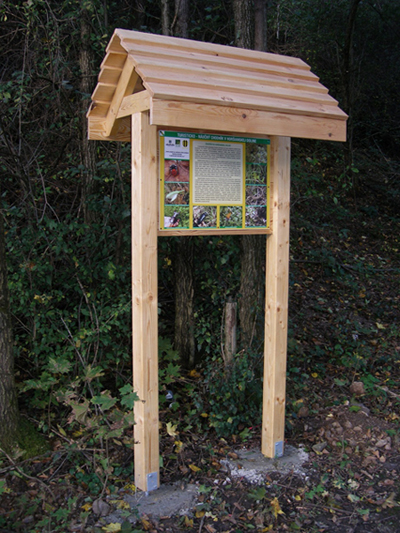 Nature trail Čajkovské bralie informs on natural, protectionist and historic matters of interest of direct surroundings of Čajkov village. It is named after andesite rocky forms. Another name of the nature trail Sovia dolina (Owl´s valley) points to its location. There are 5 stops with signboards. Undemanding trail is also appropriate for children and elders. The trail was opened in 1990. The route, which introduces southwestern part of Štiavnica mountain characterised by thermofilic oak forests and small rocks, is trouble free in terms of orientation.

- is situated in the mouth of Owl´s valley (Sovia dolina). It provides general information on Štiavnice mountain in the area of Čajkov village.

- informs on mouflon (ovis musimon), introduced species from Sardinia and Corsica and oak ( Quercus cerris) – a typical tree of surrounding forests.
Panelboard No. 3

- is situated in the locality of Malé Bralie. It informs on flora of Štiavnice mountain.

Panelboard No. 4
- is situated in the locality of  Stredné bralie, it is focused on the animals in the surroundings of Čajkov.

Panelboard No. 5
- is installed in the locality of Horné (Huliakovo) bralie. It informs on geological and geomorphological processes that formed Štiavnice mountain. 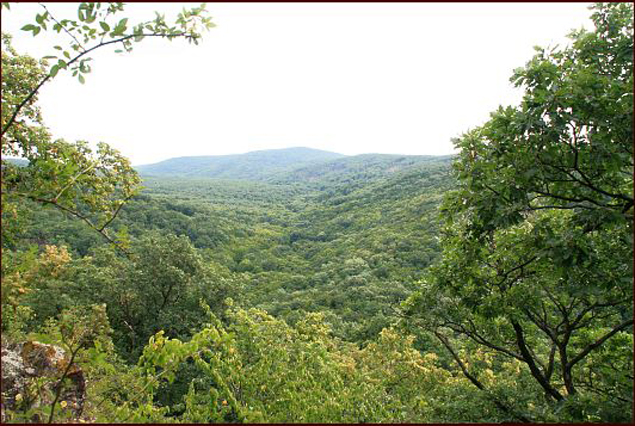 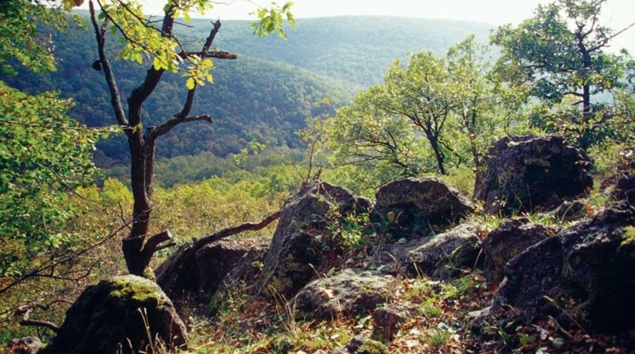 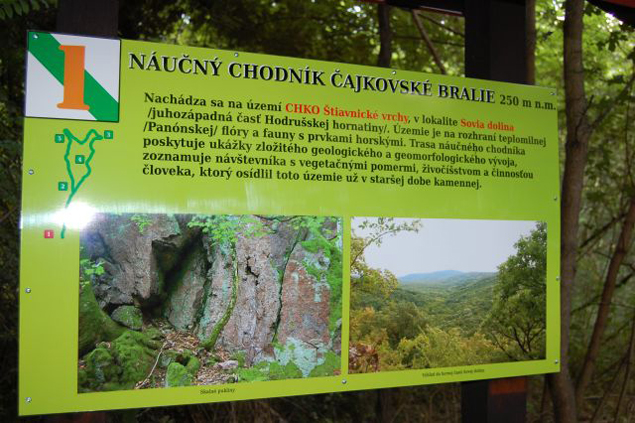 Bátovce village has made accessible the touristic - nature trail along with 6 sign boards. The signboards begin on the square, the trail continues through Dolná brána (Lower gate), runs along the dam, onward the area of small houses with wine cellars and finishes with a spectacular view of panorama of Bátovce and its surroundings. The trail is 5,3 km long, terrain is modest and it takes about 4 hours. 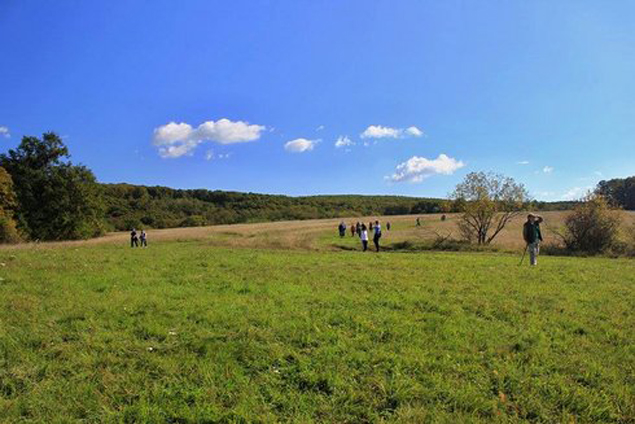 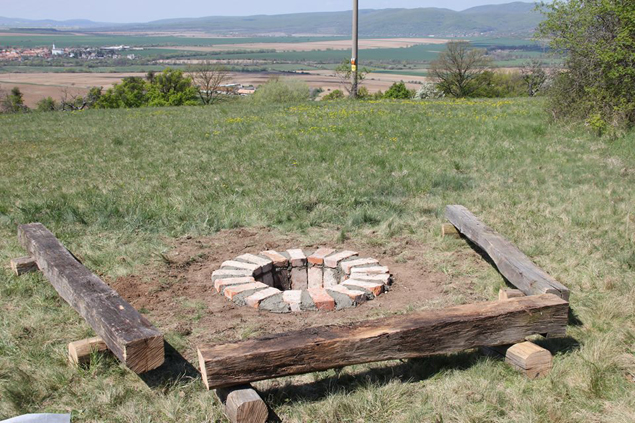 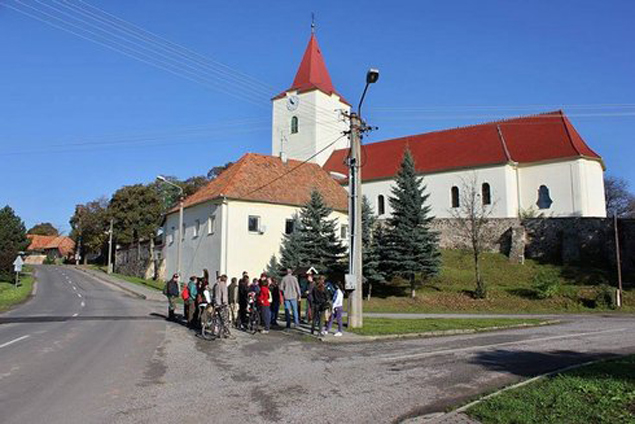 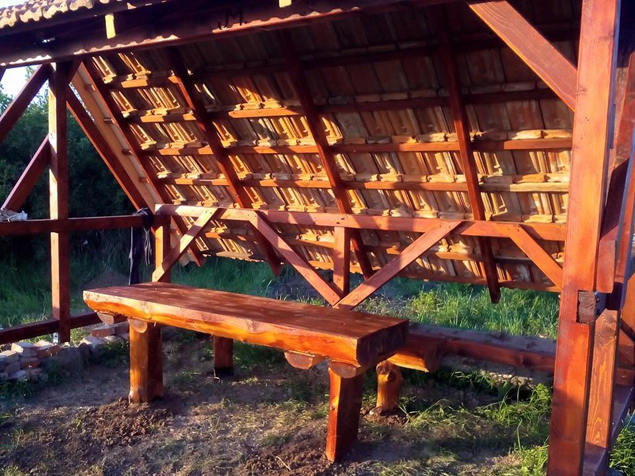 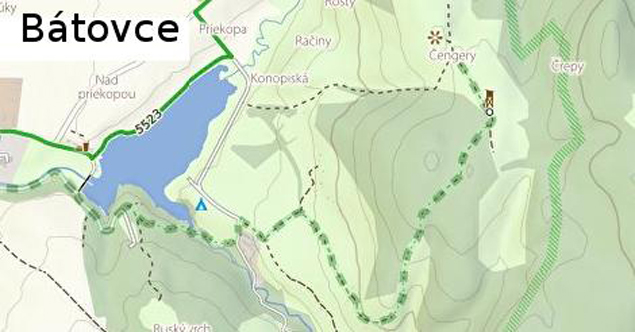 Nature trail In the track of an old ore mining in Pukanec (a former independent royal mining town was founded in the second stage of mining development in Slovakia at the end of the 13th century) begins on the square of Pukanec outside the Evangelic church, which was erected by the state road running from Levice to Banská Štiavnica. On the square there is also a bus stop, where the blue tourist sign of a Pukanec - Rudno nad Hronom  tourist trail also finishes. From the leaving point (lying on coordinates according to WGS84 - 48° 21,160'N 18° 43,257'E in about 360 m above sea level) we set off soutwestern direction along the SNP memorial and the municipal office building (former baroque – classicistic building of town hall from the half of the 18th century) along Viničná street.

The project of the Nature trail -  In the track of an old ore mining in Pukanec was made and executed by NGO TERRA BANENSIUM – Land of miners in Pukanec. It was sponsored by Orange.

Leaving point:  Information board outsite the Evangelic church on the square in Pukanec.

Target point :  Terra Banensium building – Land of miners on the square in Pukanec

Description of the trail:

Nature trail informs visitors about the history of the former independent royal and mining town Pukanec, focusing on old mining structures and description of mining, processing and gold – silver ore treatment. On the signboards  there is also partially depicted flora and fauna of Pukanec surroundings. They inform visitors about the most typical geological features of direct surroundings of Pukanec. Length of the trail is 5,2 km in modest terrain with 140 m superelevation.

Coopery in Pukanec has deep roots and relates to winemaking. Ladislav „Darvaš“ Hruškovič is the last cooper master who inherited the craft after his father. In future he is planning to open a coopery museum in his house.

Non – mininig matter of interest on the trail (about 20 m left  on Viničná road among the houses) there is a well, which bubbles have been coming up from withing living memory. It has got its name after its owner.

Beginning of ore mining goes back to the time of the first written reference about Villa Baka (1075). In the past its water had driven pulpers (ore treatment), nowadays it is a source of drinking water for Pukanec. Behind the adit  (in the place called Betón) the trail enters  the Chorvát valley.

Buried adit lies on the left side of the Chorvát valley. Last reference about the adit comes from the chronicle from the year 1755. The adit headed to south where it joined Ergi adit through the winze. Difference in elevation opposite the mouth of Ergi adit was 12 m.

Buried Theresa adit lies on the left side of the Chorvát valley. There is a big pile outside the adit.

Buried Josef adit lies on the left side of the Chorvát valley. There is a big pile outside the adit.

Dorothea lies at the end of Chorvát valley on the right. Weitenzeche lode was being mined in the adit. In 1878 František Platzer alleged that the content of metal in lodestuff was 30g/t  Au – Ag. There is a caving fall about 150 m from the adit´s opening.

We do not know its name but we call it „Štvorec“ (Square) due to its shape. It is situated in a direct line of Weitenzeche lode.

Currently the adit has depth of 10 -12 m, its real depth can be even much more. It also follows Weitenzeche lode.

In the area of „Kozačka“ adit there is Petri lode and Josef lode ends up somewhere here.